The History of U.S. Asphalt

The first recorded use of asphalt as a road building material occurred in Babylon around 625 BCE. The Ancient Greeks were also familiar with asphalt. In fact, the word asphalt comes from the Greek “asphaltos,” meaning “secure.”  The related art of masonry developed around the use of strong mortar from natural asphalt found in the ancient Mediterranean area.

Little known fact: When Christopher Columbus landed on the shores of Trinidad in 1498, he not only discovered the New World, he was the first European to find the Asphalt Lake now known as the Pitch Lake, the largest natural deposit of asphalt in the world. This very asphalt would later be used in 1876 on the paving of Pennsylvania Avenue in Washington, D.C., covering 54,000 square yards.  This Project definitively proved the quality of North American natural asphalt, and made it no longer necessary to import rock asphalt from Europe. 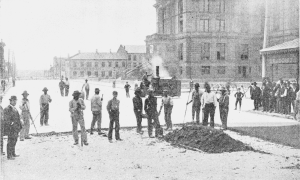 In 1870 Belgian chemist Edmund de Smedt — considered the father of modern asphalt — filed patents for “sheet asphalt pavement.” De Smedt is credited for laying the first true asphalt pavement that same year in front of the Newark, N.J. City Hall. Ironically, the Newark project ended as a failure due to substandard materials.

Around the same time, another asphalt patent was filed by Nathan B. Abbott of Brooklyn, N.Y. in 1871. Frederick J. Warren is known to have filed eight patents between 1901 and 1903 for “hot mix” asphalt pavement.

After the end of World War I in 1918, steadily increasing US automobile usage created the need for improved roads outside of major city limits. Primary hindrances to widespread automobile travel at that time were dirt roads and their inherent dusty and muddy condition. 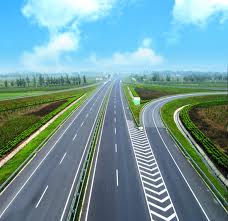 The Era of the Turnpike

The 1920s and ’30s brought about an increase in road usage in the US. After World War II, full-scale automobile production resumed along with major levels of road maintenance and new highway construction. Massive resurfacing programs began but could barely keep up with post war travel demands. By 1950, vehicle registration exceeded 40 million cars and 8 million trucks. In 1956, President Eisenhower signed the Federal-Aid Highway Act and launched the Interstate System to create an infrastructure highway program unmatched anywhere in the world.

By the mid-70’s, a national move to conserve energy and materials initiated a widespread interest in recycling of pavement materials, making asphalt America’s # 1 recycled product. 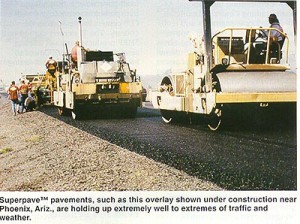 Roadways are principally constructed of either asphalt or concrete, but some roads are quieter than others. A traffic study by the World Road Association indicates that asphalt pavements are at least 4 dB quieter than concrete pavements. 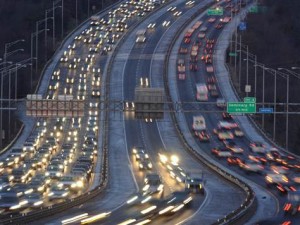 As our population, travel, and economic activity increases, there is more wear and tear on America’s roads, bridges, and public transit systems. The U.S. population has increased 23% since 1990 and the number of miles driven has increased 41%. The length of “rush hour” doubled in the nation’s urban areas from three hours in 1982 to six hours in 2005.

As a heavily used national resource, only half of the nation’s major roads are in good condition, based on an analysis of recent Federal Highway Administration data. The situation is worse in high traffic, urban areas where one in four roads is in poor condition. In 2007, these urban roads carried two-thirds of the nation’s vehicle traffic.